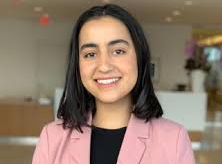 Bushra Khadra is a first-year nursing student at the University of Ottawa. She grew up in Brockville, Ontario where she was heavily involved in the community. Last school year, she served as the student trustee for the Upper Canada District School Board, representing more than 29,000 students across 81 schools. Bushra served as the Professional Development Coordinator for the Ontario Student Trustee`s Association (OSTA-AECO), where her responsibilities included organizing and executing the organization’s three provincial conferences. She has strongly advocated for the resettlement of Syrian Refugees in Brockville. In her efforts, she has run several fundraisers, translated, and spoken with government officials to aid asylum seekers. As a Girl’s Inc ambassador, Bushra has co-written various speeches advocating for better representation of women in politics, that she later presented in Parliament and the Legislative Assembly of Ontario. She has also spoken against human sex trafficking in her community at a variety of local events.

REGISTER FOR THIS SESSION LIMITED SPACE AVAILABLE Our panel will dig into the lack of input being incorporated by Canadian Youth in Federal Policy in Canada. It will focus on the realities and frustrations faced by Canadian Youth by not being able to express their opinion in policy that directly impacts the way they live […]