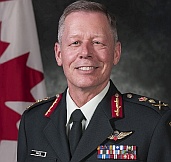 General Jonathan H. (Jon) Vance was born on 3 January 1964 in Kingston, Ontario and grew up in a military family.  He started uniformed life at the age of 13 as an army cadet in Lahr, Germany. General Vance joined the Canadian Armed Forces in 1982 and was commissioned as an infantry officer into The Royal Canadian Regiment in 1986 following his graduation from Royal Roads Military College (RRMC). General Vance has served in Canada, Germany and on UN Peacekeeping operations with the 1st, 2nd and 3rd Battalions, The Royal Canadian Regiment, and has commanded at all levels within the field force from platoon commander to brigade commander and in combat operations as a Joint Task Force Commander.

His early command and staff experiences included commanding Combat Support Company and The Duke’s Company in 1RCR, and serving on the VCDS strategic planning staff as a major and lieutenant-colonel.  From 2001 until 2003 General Vance commanded Second Battalion, The Royal Canadian Regiment in Gagetown, New Brunswick. He commanded 1 Canadian Mechanized Brigade Group in Edmonton from 2006 to 2008 and subsequently deployed as Commander Joint Task Force Afghanistan and Task Force Kandahar in 2009 and again in 2010.

Following his tours in Afghanistan, General Vance served in Army headquarters as Chief of Staff Land Strategy and as Director of the Strategic Joint Staff in National Defence Headquarters. He completed a tour as Deputy Commander, Allied Joint Force Command Naples in July 2014 before assuming the position as Commander Canadian Joint Operations Command in September of the same year.

General Vance was promoted to his current rank and formally appointed as the Canadian Armed Forces Chief of the Defence Staff in July 2015.

General Vance is a graduate of the Canadian Forces Staff School, the UK Combined Arms Tactics Course, the Canadian Army Staff College, the Canadian Forces Command and Staff Course, the Advanced Military Studies Course and the Coalition Forces Land Component Command Course. He holds a Bachelor of Arts Degree in Military and Strategic Studies from Royal Roads Military College, and a Master of Arts Degree in War Studies from RMC. His decorations include the Order of Military Merit in the rank of Commander, the Meritorious Service Cross with bar and a Mentioned-in-Dispatches. In 2011, he was awarded the Vimy Award for his contributions to Canadian defence and security.

INTERPRETATION TOKEN: LEADERSHIPCAN Armed conflict affects women, girls, men and boys in many ways. However, women are often excluded from conflict resolution processes. As part of its commitment to the global women, peace and security agenda, Canada has placed this agenda at the heart of its Feminist Foreign Policy to strengthen efforts to increase the participation […]