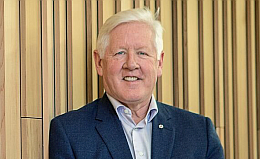 Bob Rae is Senior Counsel at Olthuis Kleer Townshend LLP, a law firm that focuses on indigenous issues, and also teaches at the University of Toronto as a Professor of Public Policy in the Munk School, the Faculty of Law and Victoria College.

Elected eleven times to the House of Commons and the legislature of Ontario, he served as Ontario’s 21st Premier as well as Interim Leader of the Liberal Party of Canada.

Bob Rae is the author of 5 books and three government reports, most recently on the Rohingya Refugee crisis, where he has served as Special Envoy for the government of Canada.

Bob Rae is a Companion of the Order of Canada, a member of the Order of Ontario, a Privy Councillor and a Queen’s Counsel. He is a Senior Fellow of Massey College and of the Forum of Federations, an international NGO which he co-founded in 1998.

He received a Lifetime Parliamentary Achievement Award in 2018 and has received many other honours in Canada and internationally.